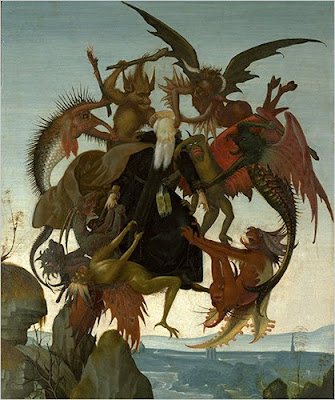 Character flaw though it was, I had scant interest in art before 1999. Dogs playing poker was about it. That spring, I visited friends teaching in Italy and in short order experienced the Sistine Chapel in Rome and Michelangelo's David in Florence and, boom, I had an epiphany. (It didn't hurt that we then took the train to Paris and I visited the Louvre shortly after.) I have not passed on the art museums in various cities I've visited since.

So I have this thing for Michelangelo, as we all should, which made this story about his first known painting, The Torment of St. Anthony, being on display at the Metropolitan Museum of Art in New York interesting to me. "Mike" was 12 or 13 years old when he painted it. And yeah, it's kind of spooky. Imagine what he might have done if they had put him to work on the CGI for a horror flick, another kind of "art" I enjoy.
Posted by Mr. Greg at 5:33 AM