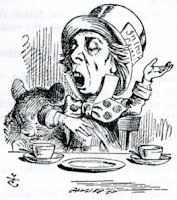 How do you know you know what you know? The answer, as dad knew, was sometimes you don't--if you take an honest look at that position you're so stridently sure of (and yeah, I'm talking to you Tea Party wingnuts). This, for instance:

"History records that President George W. Bush, who inherited a $236 billion government surplus from the Clinton administration in 2001, handed President Obama a stacked deck eight years later. The Congressional Budget Office's projected budget deficit for FY2009, beginning four months before Obama took office, was already in excess of $1.3 trillion. Indeed, the 2011 budget deficit is projected to be ever-so-slightly lower than the one Bush left on the White House doorstep. Despite the one-time $787 billion economic stimulus (spread over three years), no huge growth in government spending has taken place on Obama's watch. Three proximate causes of the rising national debt remain: the Bush tax cuts of 2001, his unfunded Medicare drug benefit, and the wars in Iraq and Afghanistan."

More in this succinct, informative commentary.
Posted by Mr. Greg at 10:28 AM No comments: 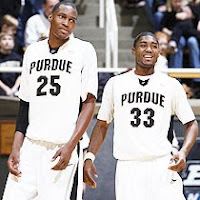 Reality: 2 potential NBA players still on team, 5 guys 6-5 to 6-10 to fill the gap, 1 junior point guard who's started 3 years. Let's say Robbie was going to average 20 and 15 this year, which is high. You're telling me Matt Painter can't get 4 points and 3 rebounds out of 5 replacements (realizing some will do more than others)? Defensively, 25 fouls to spend, which should allow them to be aggressive; smart, hopefully, but aggressive. Moreover, a diverse group, which could allow Purdue to really take advantage of favorable matchups.

None of that takes into account improvements by the other 2 potential All-Americans on the team (likely), two highly rated freshman guards, and a couple experienced juniors on the bench.

And people are saying they're barely still worthy of a Top 25 ranking? You just keep thinking, Butch, that's what you're good at. --The Sundance Kid

I kind of like it, though, because it may piss them off and motivate them further.
Posted by Mr. Greg at 3:31 PM No comments:

So I was listening to my man John Prine today and, let's face it, John Prine is not the world's greatest singer. Mostly, he more or less talks through his songs in a sing-songy way and the point isn't his pristine or rangy voice but the words and the feeling with which he delivers them. True, as well, of the late (and lamented, in my house) Harry Chapin or Mr. Tom Waits. True also of my favorite male fadista Alfredo Marceneiro, whom I hear in Ana Sofia Varela singing Quase Um Anjo (Almost An Angel), Estranha Vontade (Strange Will), O Corvo (The Crow) and a lot of other places.

She does not sing in the precious tones of Amalia or generate the aural and emotional roller coaster that is the singing of Mariza. She does not make me think of a powerful blues shouter like Jimmy Rushing, as Carminho does. But she sings captivating, expressive, emotive fado as appealing to me as John Prine doing Sweet Revenge, Harry Chapin doing A Better Place To Be or Tom Waits doing Closing Time.

Her voice is prettier than those dudes, but the end result is the same: good tunes, and better stories, well told. The album title means fados, essentially fates, of love and sin.
Posted by Mr. Greg at 8:22 PM 3 comments: