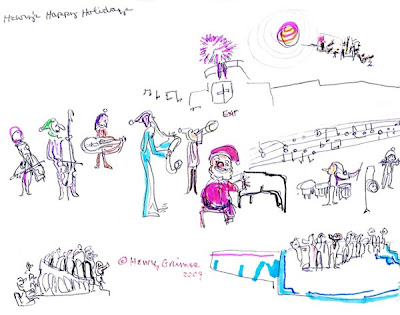 The 2009 Xmas doodle from the great Henry Grimes, jazz bassist extraordinaire.
Posted by Mr. Greg at 11:17 PM No comments: 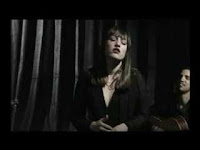 Carminho, whose mother Teresa Siqueira was a fadista and owner of Taverna do Embuçado, a well-known Lisbon fado house, has been listening to and singing these songs and songs like them since before she was a teen, which itself ended just a half dozen years ago. This is to say that, while young, her experience with the music is actually quite lengthy and it shows on her solo debut.

She clearly is intimately familiar with what it means to sing fado. Traditionalists might balk at what a Mariza or, certainly, a Mísia does with the music. Not this, it is perfect fado, whether zippy, as in Marcha De Alfama or Voltar A Ser, resigned to the vagaries of life, as in O Tejo Corre No Tejo or A Voz, or melancholy, as in Carta A Leslie Burk or Senhora De Nazare.

What I find particularly attractive about her, however, is not that she sings fado very well, which is true of many fine fadistas, but the quality of her voice. I am tempted to call it husky, although rich might be a better characterization. Her voice is similar in quality to, in a jazz context, Nina Simone's or, more recently, Lizz Wright's with hints of Billie Holiday, all of whom I would love to hear taking a crack at fado. That being unlikely (impossible), I look forward to hearing a lot more from Carminho.
Posted by Mr. Greg at 10:32 PM 3 comments: 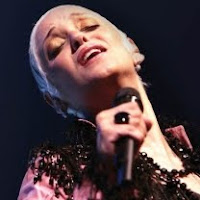 With which she arrived in 2001. Loucura is a statement of her considerable traditional fado chops and Poetas signals her intention to extend the music, while still maintaining the tradition, by incorporating modern sensibilities, an impression then enhanced by Chuva following.

Ó Gente Da Minha Terra would be a dramatically sad song if Pee-wee Herman were singing it. Mariza singing it in concert sometimes makes herself cry. This song, if no other, and there are others, would have marked her for stardom. Oiça Lá Ó Senhor Vinho is an energizing fado romp about what happens when you drink too much wine and also related to Sr. Vinho, the venerable fado house where I had dinner a week ago tomorrow. It is, as well, a song frequently sung by Amália Rodrigues, as is Barco Negro (the last listed track), which Mariza takes in an unusual, interesting deliberate fashion.

Stick around for the bonus track, which only seconds what I said about Ó Gente Da Minha Terra. I saw, heard her do it live Saturday night in Lisbon. Never gets old. If you really want to be blown away, see the CD (or better yet the DVD) Concerto Em Lisboa.
Posted by Mr. Greg at 9:41 PM No comments: 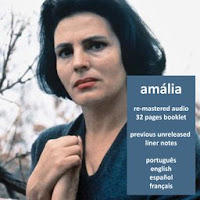 Besides the pleasure of hearing the operatic voice in wondrous form and the vocal gymnastics she employs singing it, there is something incredibly sensuous, in both the contexts of the word, about hearing Amália Rodrigues sing The Nearness of You in English, with just a hint of her Portuguese accent for spicing.

From Coração Independente (Independent Heart), iPlay, an excellent compilation in conjunction with a museum exhibit of the same name looking at Amália's life and legacy 10 years after her death in 1999. Super versions of Barco Negro and Ai Mouraria on this as well and the fado ditty É Ou Nao É? is a delight I just do not grow weary of hearing.
Posted by Mr. Greg at 9:56 AM 1 comment:

I enjoyed everything about my trip to Lisbon last week, except for my bag arriving a day and a half after me. Thanks American Airlines. But my favorite interlude was probably the better part of a day I spent at Amália Coração Independente, a 10-years-after-her-death restrospective on the life and impact of the great fadista Amália Rodrigues.

One thing really cool about the exhibit was the plethora of film clips it includes of Amália singing at various ages and in contexts including concerts, television, film and informally. A clip from the Coke Time variety show with Eddie Fisher and Don Ameche, in which she sings Coimbra (April in Portugal) and gets a bottle of Coke at the end (the boys bring one out for all of them), made me chuckle. A clip of her singing along impromptu with her mother, the two it looks like just sitting in the back yard, was gripping.

Here are a different series of clips I found in a Web review of the exhibit.
Posted by Mr. Greg at 7:28 AM 5 comments: 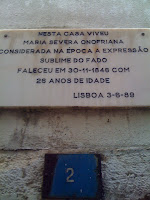 ...more or less. Things I learned in Lisbon. Historical marker at what was (in theory) once the place where lived Maria Severa Onofriana, or A Severa, a tall, elegant and gracious prostitute who sang in taverns and bars and was known not only for her singing and guitar playing but her aristocratic lovers. She is the first known great fadista (singer, female or male, of fado) and the subject of a novel, a play and the first Portuguese "talkie," all titled A Severa.

I think fado is very much like blues and jazz, originally a music of outsiders, outlaws and outcasts fashioned as a means of coping with difficult lives and protesting the injustices in which that difficulty was rooted while promoting cultural identification and solidarity.

Later, it becomes accepted by the so-called better elements of society and then a darling of the intelligentsia, particulary when Amália Rodrigues, the greatest of fadistas, and her favorite composer Alain Oulman begin to marry fado music with serious, landmark Portuguese poetry.

Yet, I posit, like jazz and blues, fado even as a now respected and mostly respectable art form, retains the intrinsic qualities that make it exciting (my grandmother would probably have said racy) and powerful. Fado, likewise, has roots in the music and dance of Africa and African slaves, in Brazil and elsewhere in the former Portuguese empire. Sound familiar?
Posted by Mr. Greg at 8:31 PM No comments: 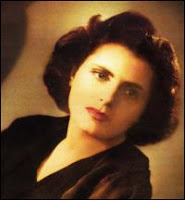 We're guessing, because the literature with the CD gives us no clue, but the guess is that this is the Rainha do Fado (Queen of Fado) in the '50s, at the height of her career with the traditional fado, simple accompaniment of Portuguese guitar, classic guitar and bass, thus making her voice, and what a voice, primary. The version of Barco Negro (Black Ship) might be the definitive version of a song that gets to the very essence of fado's seafaring roots (and the longing for the seafarers gone and of the seafarers for their country, home, families and lovers left behind them). She navigates Coimbra, another classic fado song, in Portuguese and then renders it in English. It is fado either way, could it not be? On Nao Quero Amar she works that incredible voice every which way but loose and I am, and everyone should be, impressed, followed by almost overwhelmed on Petenera Portuguesa. In my experience, only Ella is capable of such vocal manipulation. An aside, this is my favorite picture of her. Look at her face, her eyes and mouth, they say fado.
Posted by Mr. Greg at 9:38 PM No comments: 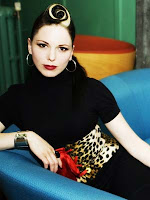 If I were going to get a love tattoo, it might be for Imelda May. I defy anybody to say she sounds Irish, which she is, on this, not that there would be anything wrong with said. Think Candye Kane meets Lavay Smith with a little bit of Jolie Holland (Falling in Love with You Again) and Madeleine Peyroux for good measure. Johnny Got a Boom Boom I might make my perfect soundtrack for kicking somebody's ass. Wild About My Lovin' makes me think of Martha Davis and the Motels, as does the title track. Big Bad Handsome Man? Mondo bluesy jazz tune plain and simple. I'm inclined to venture that she's a more interesting Norah Jones on Meet You at the Moon, or a more pristine, less froggy, female Tom Waits. Likewise the Waits analogy on Smokers' Song. Kind of freaky, I know. But an indication of how nifty the whole thing is. Smotherin' Me is a cool jump blues tune. It's You're Voodoo Working includes some mean Hammond organ playing by Danny McCormack (and tell me that guy ain't Irish; OK, he's not, he's English, as are the other musicians evidently, save Imelda), and well it should include some mean Hammond with that title. Nothing not to dig here from top to bottom. What I worry about is that she will have a damn hard time topping it in round two.
Posted by Mr. Greg at 8:54 PM 2 comments:

As my man Hugh Totten is wont to say...

..."the f--k you say," which is my take on Yellow Submarine by these Beatles guys I discovered. I mean, the title track itself is, "what the hell is this all about?" Hey Bulldog, you can talk to me, if you're lonely you can talk to me, plus dogs barking, plus you haven't got a clue, which, quite frankly, I don't, except that I know it's a pretty rocking tune. Then the second half of the CD is classical music. The f--k you say? It's all too much for me to take, well, not exactly. Love is not precisely all you need, but it is a pretty good start.
Posted by Mr. Greg at 8:37 PM No comments: 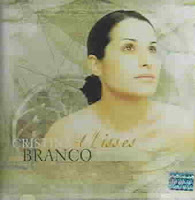 I have stood on more than one big lake at night, far from the lights of the city, watching the moonlight shimmering on the water. I want to say that her voice on this shimmers, like moonlight on the black expanse of a big lake, or on the sea, more appropriately. Of particular interest: an English-language rendition of Joni Mitchell's A Case of You, which Dona Cristina makes into a fado even if it's not sung in Portuguese. There are some excellent fados sung in Portuguese as well, along with some wonderful Portuguese guitar playing by Custódio Castelo in what is, for the most part, the stripped-down accompaniment of tradition, although this CD is not, strictly speaking, traditional.

Overall, it is lighter and, in my feeling, not quite as gripping as some of the fado CDs I admire from, say, Mariza or Amália. But that isn't necessarily a criticism. Diversity is good, even in fado, and it can be nice to enjoy the intrinsic beauty of fado singing without the pain, or as much of the pain anyway, characteristic of the form. Muito bom.
Posted by Mr. Greg at 1:16 PM No comments:

Nice post on For The Sake Of The Song, a pleasingly eclectic music Web log (at least for this very eclectic music consumer). Five fine Amália Rodrigues songs you can listen to on line or download.
Posted by Mr. Greg at 9:37 AM 2 comments: