Hill's playing on this one illustrates my thought that he was the next logical progression in the line running from Monk to Herbie Nichols.

Charles Tolliver gets in some strong Woody Shaw-like licks and tenorist Joe Farrell plays with the verve and sophistication that Joe Henderson was about this time (1968). Tolliver and Farrell are strong in ensemble as well, which struck me in particular on Black Sabbath and Dance With Death, but is true pretty much throughout.

You could also class this as the Jazz Messengers taken out closer to the edge of the avant-garde, although not over it.

Density, in an ideas and stuff happening sense, is the word that comes to mind whenever I am listening to Andrew Hill, especially his '60s Blue Note sessions.
Posted by Mr. Greg at 2:48 PM No comments:

I wanted this when I saw the album cover in the museum at Carnegie while there to see Sonny Rollins' 50th anniversary concert, but they didn't have it in the museum store last week. (Snapped it up after I flipped across it at B&N today.)

This is the acoustic playing by Miles Davis most reliant on power versus subtlety, at least that I can recall sitting here now; he blows like he would later in his electric bands, where he's strongest in a trumpeting sense over the course of his career, I think.

On Teo, he lets loose in a way that says he could have been Dizzy, or Maynard Ferguson, if that had been his thing.

I think he pulls Hank Mobley along with him (for instance on Walkin') as well and Mobley's playing is another thing in this set's favor. Nice addition to the Blackhawk sessions in the coverage I have of a Davis quintet that, along with the George Coleman group, doesn't get the attention deserved because of their transitional nature between the two landmark quintets with Coltrane-Garland-Chambers-Jones and Shorter-Hancock-Carter-Williams.

Miles pretty much has to play strong to stand out on three numbers with the Gil Evans Orchestra performed in the same concert at Carnegie. Maybe that carried over into the quintet pieces. He's even loud, fast and aggressive with the mute in place.

Crosses my mind that this, in fact, is a neat snapshot of his band in transition and his own playing, too, a movement toward the sound, less pretty but even more interesting, he ultimately will have in the second great quintet.
Posted by Mr. Greg at 5:22 PM No comments: 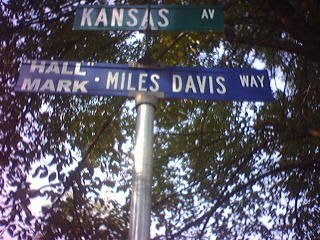 Where I am at present integrating the McDonald's for lunch. I ran across
this on my way to do some interviews this morning. It marks Miles' old
neighborhood.

From Austin (ACL festival) to New York (Sonny Rollins in Carnegie Hall,
not to mention Kurt Rosenwinkel-Mark Turner at the Village Vanguard and
Marcus Strickland at the Zinc Bar) to East St. Louis (work) in a week.

So if Dan Willis was inspired to make the (outstanding) music on Velvet Gentleman by the compositions of Erik Satie and principles of quantum physics, and I think it's also rooted (maybe heavily) in the electric music of Miles Davis, and I know Miles was familiar with Satie, does that also mean he was quantum physics conversant?

Maybe he was, although he might not (probably wouldn't) have couched it that way.

He was, in a sense, musically an example of superposition and entanglement, for instance, his music often in multiple states at once (bop and cool, cool and hard bop, hard bop and modal, modal and free, modal free electrically charged abstraction and all of the above mixed with rock, funk and proto hip hop) and the various elements of his musical development are at a base level linked over space and time.

Side note: While thinking about this I happened to read a Jazz Improv interview with saxophonist Sue Terry, who talks about composing in a quantum fashion (in "particles," that is phrases, which she doesn't necessarily arrive at or assemble in a linear fashion but rather which come together kind of organically starting, perhaps, at the end, or even in the middle in a process that, in essence, leaps back and forth in time).

Pay particular attention to the sound behind Ike's tenor (one of my favorite things). First tune, I picked up the jewel case to see who the organist was back there. There was none, but Kenny Burrell and Wendell Marshall on bass, Willie Bobo on drums and Garvin Masseaux on chekere (hollow gourd shakers) are so in sync they sound like one player and his instrument. Masterfully rendered, peaceful, slow-danceable music. (More graphically, some of it just drips sex.) They even make a bossa of Dvorak piece.
Posted by Mr. Greg at 1:21 PM No comments: