What took ya so long? 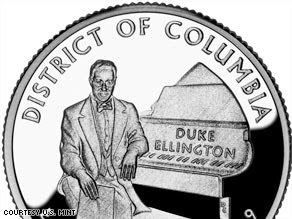 Now this, I think, is nifty, also surprising because I would have thought a King, Douglass, Carver, Attucks, et al, would have made it on before, although the state-themed quarter thing hasn't been around all that long.

WASHINGTON (CNN) -- Jazz legend Duke Ellington is the first African-American to appear on an American coin, the U.S. Mint says in introducing the latest in its line of state-themed quarters.

The District of Columbia commemorative quarter showing Ellington playing the piano will be introduced by U.S. Mint Director Ed Moy at a news conference Tuesday at the Smithsonian's National Museum of American History.

Ellington won the honor by a vote of D.C. residents, beating out abolitionist Frederick Douglass and astronomer Benjamin Banneker.
Posted by Mr. Greg at 9:42 AM No comments: