Opens with an Albert Ayler screech followed by an Archie Shepp foray into the blues and a lengthy trip, with lots of diversions, along whatever melody was in his his head, reminiscent of Sonny Rollins’ playing, before it becomes a breathless run of musical invention.

Breathless for me listening that is. Fred Anderson never loses his breath as far as I can tell.

He's a national not just a Chicago treasure in my opinion, and is still wonderful today. But he was certainly at his best when this (excellent quality) tape of a live performance in Milwaukee was made in 1980.

Hamid Drake is strong as well, not a surprise. It's hard for me to think of a more sympathetic tenor and drums pair. Maybe Mr. Rollins and Max Roach or Coltrane and Elvin Jones, the latter probably being the better comparison because of Drake's prominence here, basically as a another front-line player rather than a sideman, which was often the case with Jones.

This is a quartet date with Billy Brimfield on trumpet and bassist Larry Hayrod and when Brimfield solos, as on Black Woman and Bombay (Children of Cambodia), it reminds me of seeing Anderson last year at the Velvet Lounge in Chicago, Anderson's place, with Roy Campbell (and Henry Grimes), one of my favorite live jazz experiences. Bombay is great ensemble improvising all around.

Second volume of the Milwaukee tapes coming and I'm buying.
Posted by Mr. Greg at 8:33 AM 1 comment:

Baby Face does some screaming on Behind the 8 Ball/Mo-Rock, which I assume was a nod to the "New Thing" stuff going on at the time (it makes me think of Linda Sharrock's wailing on husband Sonny's Black Woman, which caused me to trade that CD). Baby Face would have been better off leaving it out. Thankfully, it doesn't last long or appear often.

On some cuts, like Unseen and Unknown, he travels along the edge of the outside a lot like Larry Young on Unity or Lawrence of Newark (my favorite) and that works much better. Just another reason I'm thinking Baby Face was a heck of a multifaceted player who didn't get recorded enough.
Posted by Mr. Greg at 8:55 AM No comments:

Also includes Mo-Rock, both as I understand it with his regular Chicago trio mates (Ben White guitar and Jerold Donavon or Eugene Bass drums, White in particular worth a listen). This and the recent Blue Note reissue Face to Face make three-quarters of Roosevelt "Baby Face" Willette's four recordings as a leader available again and I think that's a good thing.

On the funk-eee end of things, he reminds me of the great Jimmy Smith, but he has more of a church organ tinge than J.S., kind of like Freddie Roach, but not as overt as Roach. I appreciate the color it adds and the subtlety with which he adds it.

This one leans more to funk and soul than Face to Face, which is more jazzy and bluesy and displays the church influence a bit more prominently, but they're both good. Jimmy Smith certainly would have appreciated Roll 'Em Pete. Bantu Penda makes me think of Benny Golson's composing for some reason.
Posted by Mr. Greg at 1:52 PM No comments:

Listening to this is akin to being in the middle of a really powerful Midwest summer storm with jagged dangerous-looking streaks of lightning flashing and booming thunder crashing like a giant's bass drum, literally illuminating and shaking my apartment and sending every dog within a mile under the bed for cover.

Like the force of nature, the music is awe inspiring and unsettling at the same time. You don't dance to it or tap your foot, but it makes my hair stand on end.

I also think of it as a very accomplished and logical extension of late Coltrane, his larger band works like Ascension, for instance. If Albert Ayler had ever found enough like-minded and like-skilled players for a group as large as an octet it might have sounded this way as well.

In short Brötzmann, Evan Parker, Peter Kowald, Sven-Ake Johansson, et al created a near-perfect work of free jazz in 1968 that sounds fresh, and unrelentingly cool, to me almost 40 years later. What a wonderful reissue.
Posted by Mr. Greg at 6:42 PM No comments:

In the last month I've been to the Austin City Limits festival, seen Sonny Rollins at Carnegie Hall (which was marvelous), done Mark Turner at the Village Vanguard, Marcus Strickland at the Zinc Bar and James Carter with a symphony orchestra and Jaleel Shaw with Roy Haynes. Wonderful saxophonists (and I live for wonderful saxophonists) all. But I ain't listened to anything better than Willie Akins doing Straight No Chaser at Spruill's Cocktail Lounge in St. Louis. Guy has one CD. Get if you can find it. But if you ever pass through St. Louis at the right time, see him live.
-- From Mr. Greg's Sidekick II
Posted by Mr. Greg at 7:53 PM No comments: 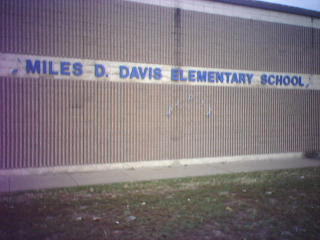 Working in East St. Louis again this weekend I passed right by this
local landmark. The music notes are a nice touch.

Slipping over to St. Louis tonight to catch saxman Willie Akins, one of
those local legends, like Fred Hess, Ernie Krivda or Bootsie Barnes not
too well known beyond home, but who should be.
-- From Mr. Greg's Sidekick II

Listened to this on the way to East St. Louis this morning and kept
thinking, geez, that's good guitar, bass and drums.

Duh, as I found out when I pit stopped at a rest area and took a look:
Pat Metheny, Charlie Haden and Billy Higgins.

Redman sounds good as well, but very Sonny Rollins like. This is a nifty
disk on its own, but interesting to contrast with his stuff today as
well. He really has grown as a player and I now hear all Joshua Redman
even when he's playing some Rollins material, as on his recent, very
good, trio CD Back East.

I still think that, like Sonny Rollins, he's most impressive live.
-- From Mr. Greg's Sidekick II

Chris Potter 10, Song for Anyone, Sunnyside

Chris Potter 10, Song(s) for Anyone is a "with strings" session I got all the way through the first time and barely remembered hearing the strings. That's how well the compositions, all Potter's, and the group improvisation work, integrate to generate the sound he’s after. I think Against the Wind is a particularly good example of this. Likewise Closer to the Sun.

His saxophone stands out on the cuts, too, (with Coltrane-like power on the latter) and on the disk in general, which is a good thing. It occurred to me listening that he has to be one of the best of the younger veteran tenorists (also soprano on this) going today, in a league with, if different from, Branford Marsalis or Joe Lovano. (He's the equal of a Marsalis or the late Michael Brecker on his CD Gratitude as well.) I’ve got to think Sonny Rollins would dig All By All, a bluesy ballad with a western tinge that sounds like it could have come off Rollins’ Way Out West.

I noticed the strings more the second time through, but I was listening for them in checking my first impression. They’re definitely part of the mix in music that made me think of it as sweeping, soaring, towering, epic, jaunty, free, sophisticated and a logical extension of Miles Davis’ last great acoustic quintet, among other things, as it progressed. But the strings are never obtrusive. Stellar 21st Century jazz.

(I’m calling it a strings session. It’s not billed that way. But when a session includes violin, viola, cello, bass and guitar, I’d say that’s that pretty stringy. More than a horn with strings thing, however, because his tenet includes, besides drums and percussion, a clarinet, flute and bassoon. Michael Rabinowitz on the latter is just a natural jazz guy, classical instrument or not.)

The other night I saw James Carter play a saxophone concerto, written for him by composer Roberto Sierra, with the local symphony, which was cool (and pretty jazzy). After, somebody I was talking to about it pointed me to this clip.

Chasin' the Gypsy is the prime CD on which to hear J.C. wrestle this beast.

This one is from the On the Corner period. With the Cellar Doors Sessions box from the Jack Johnson period, I make it exhibit one against the notion that Miles and his guys had a hard time doing what was heavily post-produced in the studio for the albums live. In fact, the live stuff in many cases is even more coherent and the musicianship is generally outstanding. Perfect, no, but that's what happens when you're taking risks and taking risks is what jazz is about.

Also strikes me that this is jazz, like 30 years after the heyday of swing, whose beat must have compelled people to get their feet moving, as in dancing. Funk-eee. Great driving, as in an automobile, music as well. A powerful pulse (from Michael Henderson's bass) also makes it great driving music musically.

That said, there are sections more in an electric free jazz or electronica or trance vein. In other words, Miles was pushing the envelope ... again.
Posted by Mr. Greg at 11:40 AM No comments:

It's 1978 and we are riding in a red Triumph Spitfire, which breaks down a lot, but is great on a summer, or nice fall, day with the top down and Born to Run or Darkness on the Edge of Town blasting out of the speakers and our best years are ahead of us and we can do and be anything and we're probably bullet proof, too, and chicks dig us, the important chicks anyway, and there will be a party tonight and we feel great and life is so so good.

Kind of nifty all the places a good disk can take you. Magic, like in time machine.

(Favorite tracks: I'll Work for Your Love, Long Walk Home and secret track 12. It's all good.)
Posted by Mr. Greg at 7:33 PM No comments: