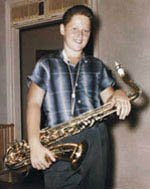 This tidbit amused me in a nice piece about Bill Charlap's The Gerry Mulligan Songbook tribute (which I'd like to see Charlap record).

Shortly after Mulligan's death in 1996, the bari master's widow received condolences and a tribute from a big fan who played a little saxophone himself.

“No one ever played that horn like he did,” wrote President Bill Clinton, “and no one ever will.”
Posted by Mr. Greg at 12:03 PM