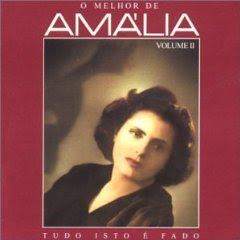 Com Que Voz, 1970, is one of her classic LPs, and maybe her greatest. Her voice is in a mature but masterful shape, every trick in her considerable bag at this point still fair game. The guitarradas behind her, Fontes Roches on guitarra Portuguesa primary among them, are masterful and the arrangements by Alain Oulman, who was her guy from an arranging perspective, also are masterful. But who has a record player now, if you can even find the record? And the CD came out long ago, too, so try finding that for less than $100, used.

Or you can buy this 2007 compilation, which includes 7 of the 12 tracks from Com Que Voz, many tracks from other hard-to-find sessions and numerous best-of cuts from CDs you can still find (56 songs in all, mostly '60s and '70s, followed by '50s and a few '80s, so mostly prime decades for her). In fact, I might suggest these 4 CDs as the perfect collection of Amália if you are going to have just one. Then again, like the old potato chip commercial, try sticking with just one after this one. Not too easy, particularly after Maria Lisboa or the incredibly gripping Trova Do Vento Que Passa and Gaivota (Seagull) from Com Que Voz, the title track from which appears here as well, bordering on overwhelming. Com Que Voz, it means with what voice; her voice, and an addicting voice it was.
Posted by Mr. Greg at 7:44 PM

"Com Que Voz" was recently remastered and edited as a double cd.

EMI-Valentim de Carvalho kept the original cover and artwork and created a great booklet with exclusive pictures, lyrics and some intros by portuguese authors and friends of Amalia.

The 2nd album contains outtakes and songs that were recorded and dropped (like a bossa nova take on "Formiga Bossa Nova").