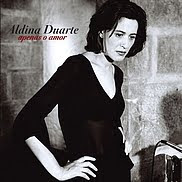 Aldina Duarte makes me think of the late Koko Taylor not because their voices sound anything alike. Rather it is because as Taylor's singing was the very essence of Chicago blues, almost organically so, Duarte's is the essence of Lisbon fado.

You might call her voice pretty but for the world weariness, the miles and miles of bad road, sadness, loss and longing she packs inside the fetching wrapper. A Voz e o Silêncio, The Voice of Silence, is one of the saddest songs I have ever heard, in Portuguese or any other language. (The CD title means Only Love.)

In addition to how she sounds and the emotion she conveys, I just like what she does with her voice in a technical sense, as a tool, so to speak. She understands the value of space the way Miles Davis did and there are places where she pauses leaving the music, and me, hanging and in a state of tension before pulling us back from the precipice. Which is to say she sometimes sings like Thelonious Monk played the piano. Listening carefully, and repeatedly, pays dividends.

This kind of fado singing demands the traditional, spare accompaniment by two guitars (Portuguese and classical) and it is executed perfectly here by José Manuel Neto and Carlos Manuel Proença. A cherished CD that I recommend to anyone wishing to explore fado.
Posted by Mr. Greg at 12:39 PM